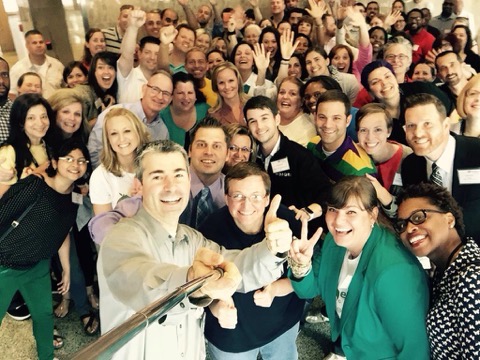 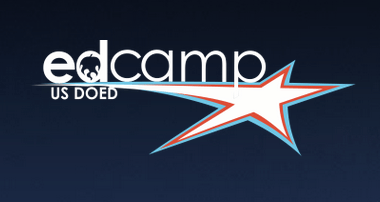 It’s hard to believe that a week ago at this time I was at the US Department of Education in Washington DC with about a hundred other educators from across the country for EdcampDOED, also known as EdcampUSA.  I hopped on a train after school on Thursday and headed down to DC.  After arriving at Union Station and taking a few jumps on the Metro, I arrived at our hotel across the street from the DOE.  I was just in time for the meet-n-greet that evening.  One of the many things I love about edcamps is how friendly everyone is.  While I was thrilled to see several old friends, there were a ton of folks I hadn’t met yet but who were happy to come introduce themselves and chat for a while.  I got to meet many educators who I had only known through ‘The Twitter’ before.  While I love my Twitter PLN, there’s nothing quite like a face to face meeting to really connect. 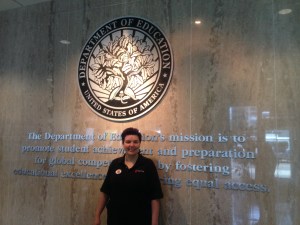 Welcome to the US DOE.

Friday morning was a beautiful, sunny day and we were all excited to converge on the DOE to start our day.  Even more attendees had arrived that morning, so the meeting room was a sea of enthusiastic educators catching up with friends old and new. 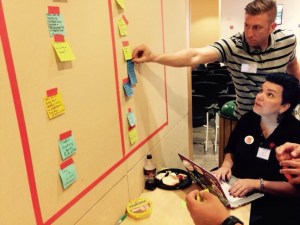 The session board filling up.

I got tagged to help manage the session board, and it was inspiring to see so many great topics appear on the board like magic.  Our topics covered a huge range, from connecting pre- and in-service teachers to how to add coding to your curriculum.  It made it very difficult to choose between so many wonderful topics.  Thankfully, the session board came pre-loaded with Google docs for collaborative note taking, so all of the resources and ideas shared in a session are now available to all. 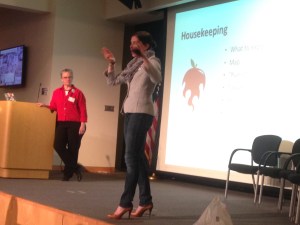 Finally it was time to kick things off.  Kristen Swanson and Hadley Ferguson gave the introductory speech, and we heard from some DOE members as well.  Then it was off to the sessions to learn and discuss! 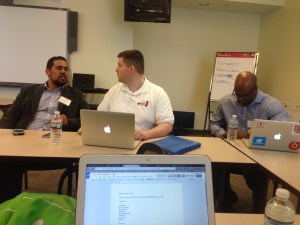 Chris Aviles and Jeff Bradbury sharing ideas in a session. 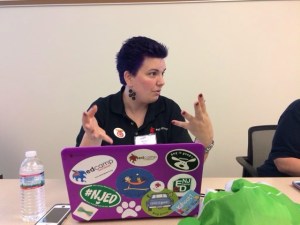 Me rambling away about STEM and Makerspaces.

Edcamps are the antithesis of the sit-and-get type of PD.  Instead of one person talking at you, it’s a conversation style of PD where everyone in the group shares ideas and questions.  As is often said at edcamps, the smartest person in the room IS the room.  While I signed up to facilitate a session on STEM labs and Makerspaces, I was thrilled to have just about every person attending the session contribute to the discussion.  There is always so much to learn from our colleagues. 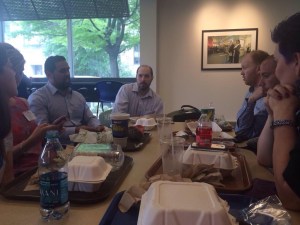 After the first few sessions, we broke for lunch.  Not only was it nice to get to spend more time networking with fellow attendees, we also had several BOE employees join us for lunch.  Our table was lucky enough to have Joseph South, the head of the EdTech department, join us for a meal and conversation.  He was exceedingly gracious and seemed genuinely interested in hearing about our issues and suggestions, to the point of whipping out a notebook to jot down our concerns and ideas.  It was heartening to feel like we were being taken seriously, and that our input was valued. 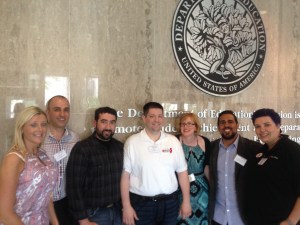 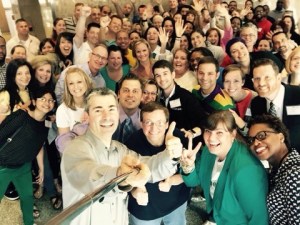 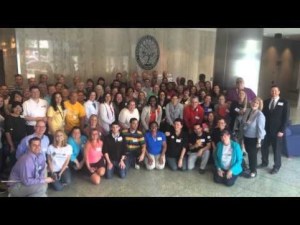 After lunch we had a final session, and then gathered for our wrap up and photo ops.  There were several of us representing New Jersey, so of course we had to get a group shot.  We also joined in for the official group photo and the obligatory selfie-stick photo. 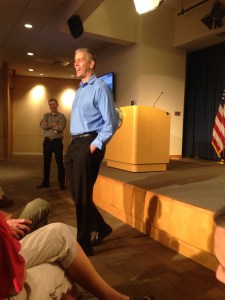 The US Secretary of Education, Arne Duncan. 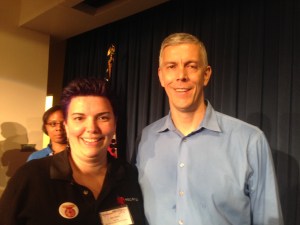 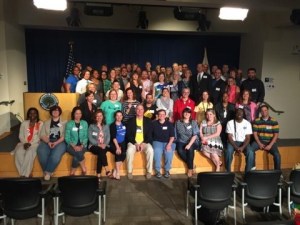 Just before we were ready to leave, the announcement was made that we might have a special guest arriving if we didn’t mind waiting for about 30 minutes.  Of course, we stayed and were thrilled to be greeted by the US Secretary of Education, Arne Duncan.  Arne spoke to us about education and the changing world we are in, and was gracious enough to stick around for photo ops afterwards.  The following videos are from his speech to us. 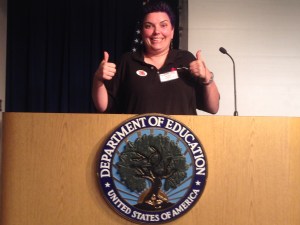 Solving all of the country’s education problems at Edcamp USA!

Even after the official edcamp was over, the learning and sharing continued on.  We had a post-edcamp meetup back at the hotel, and then later on people separated into smaller groups for dinner at various venues.  I had a wonderful dinner with my new friend @edventures, who turns out to love Indian cuisine as much as I do.  We talked for ages about education and everything else.  The next morning, we met up with @PegKeiner  for a trip to the National Geographic Museum and more conversations about education. 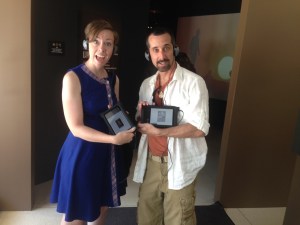 Peggy and John at NatGeo getting ready for the Indiana Jones & Archaeology tour.

I am still processing everything I learned from EdcampUSA.  It was heartening to see so many committed educators getting together to share their thoughts and ideas.  Getting to speak to the leaders in education for our country helped make us feel like we mattered.  I was also thrilled to hear DOE employees talk about how they have adopted the edcamp model in house after the first EdcampUSA last year.  Yes folks, edcamps are changing the face of PD!  Even after returning home, the learning has continued.  Through Twitter and blogs, the discussions are ongoing.  This is definitely a PD experience that I will remember forever!