As a certified EdCamp Junkie, I was excited to attend EdCamp Hagerstown this weekend.  After our InService on Friday, Little Dog and I headed out to Maryland for the weekend.  After a 3.5 hour drive, we arrived and got settled in.  Early this morning, it was time to get up and head for EdCamp!  We were hosted by Antietam Academy, which was a beautiful venue.  The turnout was a little smaller than some of the other EdCamps I’ve been to, but that turned out to be a bonus rather than a downside.  I felt like I was able to chat and connect with almost everyone attending, rather than getting a bit lost in the crowd.  I also tend to be less shy in smaller groups, so I was a lot more comfortable talking to people today.

For the first time, I put my name on the board to lead a session!  I was nervous, but I ended up with an awesome discussion group.  We talked about iPads – everything from management to implementation to apps, and more.  We had a full room, and everyone had great information to share.  It was great being able to hear about other schools’ experiences with rolling out an iPad pilot and definitely made me feel less alone in terms of planning our rollout.  We ended up having to forcibly evict ourselves from the room when the session was over so the next group could use it.  Thankfully, a bunch of us simply moved on to the next session which was also about iPads.  We continued our discussion on implementation ideas and pitfalls until it was time for lunch – at which time we simply all moved to the food court across the street to continue talking through lunch!  It was wonderful to meet such intelligent, dedicated educators! 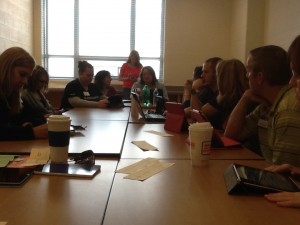 After lunch, I attended a session on iPad apps where we discussed varying apps for subject areas as well as for teacher support.  We came up with a great list of apps to try.  For our final session, I sat in on a discussion about assessments.  We got a bit sidetracked talking about Symbaloo, but also came up with some great ideas such as using Google forms, Flubaroo for self-grading quizzes, Edmodo, Evernote, conferencing, and more.  We all agreed there is no one-size-fits-all assessment, and that we need to look at a variety of different types of assessment to get a true picture of what our students are capable of.

At the end of the day, we all met up for the App Smackdown, which was great fun.  I shared Symbaloo and Class Dojo as two of my favorites.  We wrapped up with a raffle, where I won a free site license for Flocabulary!  I am so excited!  I can’t wait to get back to school and share it with my colleagues!

I made a lot of wonderful new friends today, who will also be great teaching resources.  As always, the networking is one of the best parts of EdCamp.  There’s also the possibility of me working with several others to run a PadCamp soon.  I’m excited about that as well.

For some of the awesome resources shared today, you can check out the #edcamphagerstown hashtag on Twitter, and also our session notes for the day.